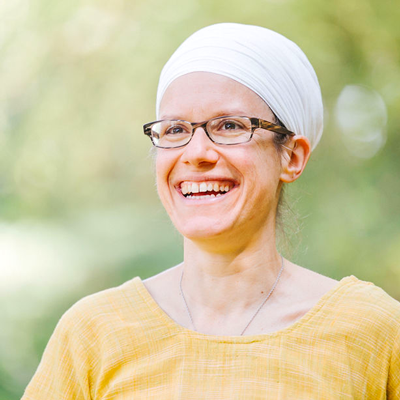 Guru Surya has been practicing Kundalini Yoga since 2002, discovering it at a time of great transition in her life. She lived in Eugene and practiced with the Yoga West community while her husband attended U of O. She feels that yoga helps her to be lighter, happier, more graceful, and grateful. Soon after moving to Portland in 2007, she began her Kundalini Yoga Teacher Training and feels blessed to teach others. She has completed all five of the Level 2 Teacher Training modules and is now part of the Aquarian Trainer Academy, supporting new teachers. Guru Surya has supported and served the Kundalini Yoga Portland organization since 2009 and continues to show up in numerous ways for the community. Her name, Guru Surya Kaur Khalsa, means a "pure princess of the sun, who brings one from darkness to light". She feels it is her destiny to humbly achieve this, and she is grateful for the opportunity to support people in reaching their full potential. When she is not practicing or teaching yoga, Guru Surya supports herself and others in connecting deeply with nature.

Payment for the classes

“If you want to know where God, the Buddhas and all the great beings live, I can tell you. Here is their address: in the here and now.”